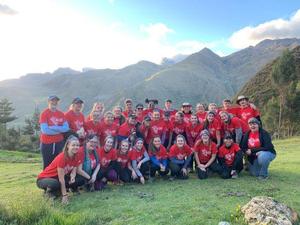 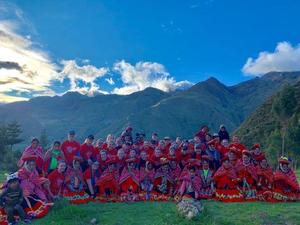 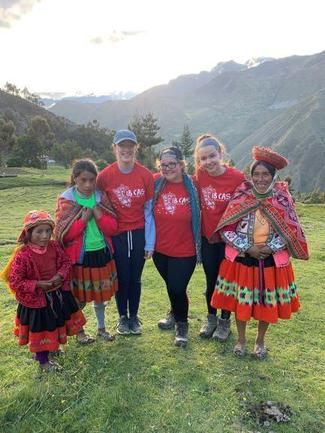 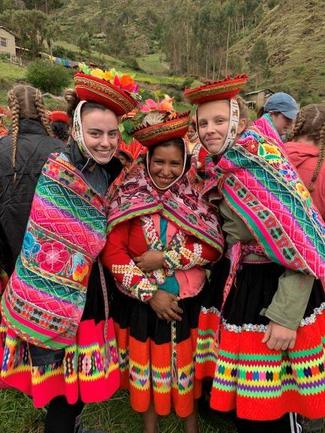 BLOOMFIELD — Yes, it was cool to hike up Machu Picchu, the iconic remnant of the Inca civilization in the Andes mountains in Peru and perhaps the go-to place to visit on many travelers’ bucket lists.

But thinking back to a few weeks ago, Bloomfield High School junior Aleida Smythe fondly remembers the time spent hiking up hills to help build a school and water infrastructure for the people in the Sacred Valley region of the South American country.

At the time, she wasn’t thinking of anything about home or school, but focused solely on helping the indigenous people who not only needed the help of the 31 Bloomfield students, but appreciated their help in ways large and small, Aleida said.

“That’s what I think about,” Aleida said. “That’s the monumental part. That was the coolest part for me.”

This is the third such trip for the program; the initial trip was to Cuba and last year, students traveled to the Dominican Republic.

More than $22,000 was raised for the trip through various fundraisers, including car washes, garage sales — students even helped park cars at an alpaca festival. Also, 86 sponsors helped make the trip possible, according to Felice Prindle-Schulte, who is the coordinator of the program.

A group of Bloomfield High School students in the International Baccalaureate Creativity, Activity and Service program are planning a community night to share and reflect on experiences of their recent service project trip to Peru’s Sacred Valley. The event, which is open to the public, will be held at 6:30 p.m. Tuesday, Feb. 26, at Bloomfield Elementary School, 45 Maple Ave.

The ultimate goal of the project was to increase educational access for girls in the village as well as to help build a school and install pipelines for clean water.

Of course, other goals were achieved just by being there.

A day after recovering from their roughly 27-hour trip to the city of Cuzco, and a harrowing journey along some winding, steep mountain roads, the students arrived at the village of Huilloc Alto, meeting the families who took the students into their homes.

People played instruments and children danced all around, according to senior Alex Roach. Many of the mothers gave them homemade bracelets, and families served tea.

“It was a really cool moment,” Alex said. “We were all kind of exhausted and just tired out from the hike, down in spirits. That was a big boost for everybody.”

Language was an issue at first, but students and their hosts were able to build bonds quickly.

“I think we were able to connect even though there was a language barrier,” Jaclyn said.

Students had to hike uphill — for some, straight uphill — to get to the work site, where some of the students helped finish up a school that needed a floor. Others carried rocks in sacks over their shoulders, back and forth to the work site. Others, using pickaxes and shovels, dug trenches down the mountainside.

Senior Jaclyn Bell remembers girls and their mothers up on a hill, throwing rocks down to the students and other family members below. They had to cross a creek with the bags of rocks to get to the school.

“We wouldn’t have accomplished as much as we did if it wasn’t for the families,” Jaclyn said.

Students did have some time each night for reflection, either by themselves or together. And for junior Marissa Giglia, mornings spent on the mountain are lasting memories.

“It was just so beautiful,” Marissa said.

On their last day of work, senior Josh Johnson was struck by a ceremony at which two of the villagers broke a clay plot, a traditional blessing of their school, which they named “Bloomfield.”

“Deciding to keep a piece of us there with them showed just how grateful they were,” Josh said. “They really just cared about us being there and helping them and were so happy to have us in their homes.”

The end of work also meant an end to their stay, which meant tearful goodbyes to new friends but also strengthened bonds with old friends.

“One of the biggest takeaways that we focused on was just supporting one another,” Alex said. “We learned from the people there and focused so much on community and on each other, on being kind and compassionate.”

Many of the students have returned home with not only a love of travel, but a love of helping people, Jaclyn said.

“I think we’re all eager to get involved with service and to not only travel, but to make change in your own community because we saw the difference that we made in Peru,” Jaclyn said.

The people of Peru also helped change these Bloomfield students. Many are not as quick to take things for granted, and their new perspective on life is life-changing.

“Kids there walk up and down the same mountain we did every day to go to school,” Josh said. “We don’t have to do that. So why should I be complaining about anything? It gives you an outlook on life to know how fortunate we really are.”

These are the lessons that are not learned from a school textbook but are just as important to students later in life. Marissa said she learned more in these nine days than she has in 11 years of school.

Junior Allison Coffey also learned something — about her friends but also about herself.

Please enjoy this video of the service project and families in Peru.